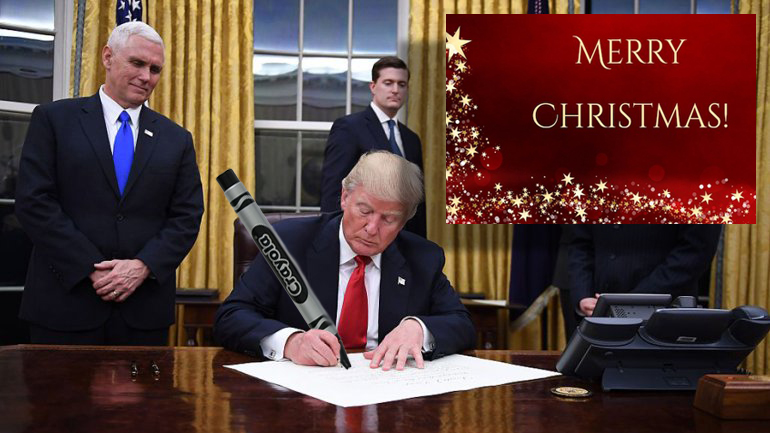 This morning, President Donald Trump issued an executive order that he says will “ensure the dominance of Christmas for generations to come.”

“Folks, we’ve had a really tremendous, bigly tremendous most would say, first term. We’ve had so many victories,” Trump said. “We stole a Supreme Court seat from a black…president. We established my beautiful resort here at Mar-A-Lago as the first Southern White House since the glorious Confederacy set up shop in Richmond. And we passed a ginormous tax cut for my wealthy golf buddies, AND won the War on Christmas.”

Trump said, however, that all of that was “merely preambular” to what will be his signature, crowning achievement for his first term in office.

“I am signing this executive order to ensure the dominance of Christmas for generations to come,” Trump said, sliding his normal-sized crayon that looks huge in his hands across the official paperwork. “From now on, after today, every American citizen must say Merry Christmas on every, single holiday.”

Pulling out a calendar, Trump began to explain himself.

“Here, I’ll show you, on this calendar my First Lady gave me. Doesn’t Ivanka look amazing in these shots? Jared is one lucky SOB, I tell you what,” Trump said.

For another thirty minutes, Trump rambled semi-coherently about how “hot,” “sexy,” “schlong-able,” and “fuck-tastic” his daughter is.

“Anyway, so here’s this holiday here, in January…Martin Luther King Day,” Trump said. He paused, a quizzical look on his face. “Wait, we give them their own holidays now? Isn’t it enough they get to be president and can vote and aren’t slaves or whatever? Anyway, we’ll look into that later. Point is, you’d say ‘Merry Christmas’ to everyone on MLK day.”

St. Patrick’s Day, Columbus Day, Veteran’s Day, and even the Fourth of July all will be celebrated with “Merry Christmas” from now on, Trump said.

“I’ve learned a lot while being your favorite, most adored and worshiped president of all time, but one of the bigliest is just how whiny and snowflake-y my base is about having their safe spaces threatened,” Trump said. “And Merry Christmas might be their biggest safe space. So from now on, that’s all I want to hear on every holiday. Don’t make me mandate that you say it every single day, fam. I’ll do it. I swear to God, I totally will do it!”

Reached for comment, Senate Majority Leader Mitch McConnell told us he was too busy getting blown by rich donors after pushing the deeply unpopular tax cut package through Congress to care “about literally anything else ever.”

Throughout the Ukraine scandal that has rocked the Trump administration and seems to have ...

5 Names to Add to the “Clinton Body Count”

When it was discovered that alleged billionaire pedophile Jeffrey Epstein had killed himself in ...

Local Man Not Defensive, But Why Are You Even Asking?!

Pat Robertson: “If The Florida and Puerto Rico Gays Stop Having the Sex With Each Other, We Might Stop Hurricane Dorian!”

VIRGINIA BEACH, VIRGINIA — Televangelist Pat Robertson told his telecongregation this morning that he ...