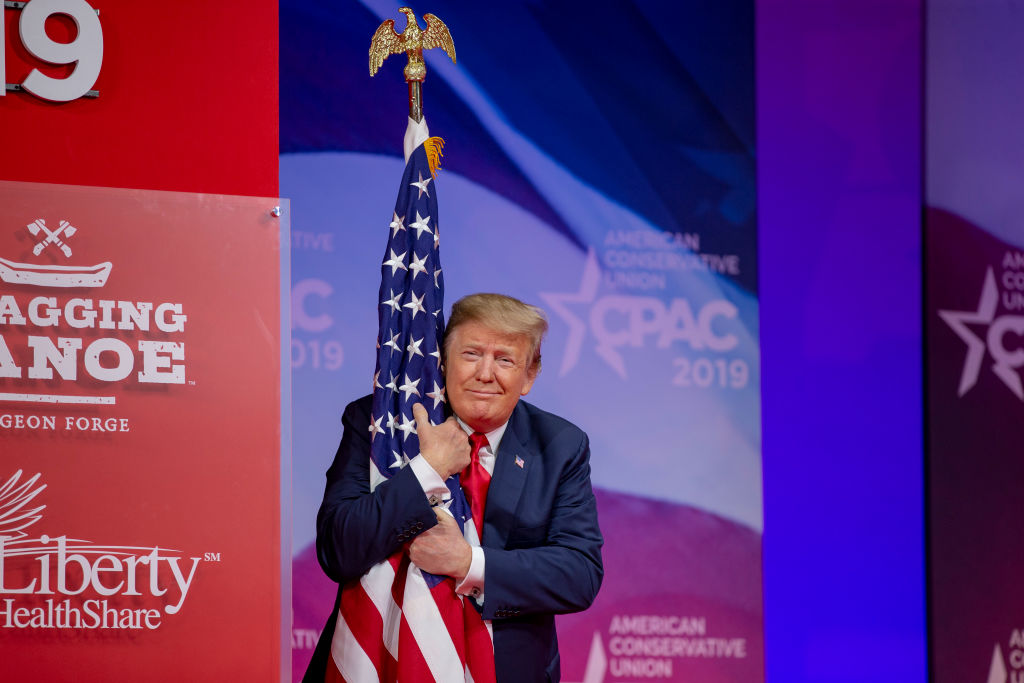 WASHINGTON, D.C. — This morning, President Trump paced around the White House lawn and shouted convoluted answers to reporters’ questions and spewed conspiracy theories over the roaring engines of the presidential helicopter, as has become his usual routine. Today is Veteran’s Day, and Mr. Trump will lead a parade of veterans later.

Trump has had an interesting relationship with veterans and the armed forces. He has regularly insisted he knows more than generals in the army. President Trump, as a candidate for office, got into a public spat with a Gold Star family. Perhaps his most famous feud with a veteran though, has been the one between Trump and Sen. John McCain. Even after his death, Trump has taken every chance he could to mock McCain’s saving vote on the repeal of Obamacare, and has insulted McCain routinely.

This morning, with pancake syrup still dripping from his chins, President Trump told reporters he was “happy” to honor American veterans, but that he prefers “honoring the veterans who were never captured.”

“This is a great day, huge day,” Trump said, “to thank the wonderful people of my armed forces. Provided they weren’t captured, of course. I mean, you would think that Veterans Day is when all veterans thank me for my service to them, but as long as they weren’t ever captured, sure, I’ll throw them a bone and thank them or whatever.”

Trump, who is the first person elected to the presidency to have both no experience in public office, nor in the military, reached into his oversized coat and pulled out a handful of “snacking jerky” he says he always keeps on hand to boost his stamina. Dipping the jerky into a thermos of au jus he keeps in other coat pocket, Trump first bragged about how he’s in “such incredible shape” that the military leaders he meets with often tell him he needs to show new recruits “how to get that Trump bod” so they’ll be better soldiers. Then, the president said that “being captured means you weren’t being a winner.” President Trump insisted that “winners manage to not get captured” and then used himself as an example.

“Look at me,” Trump said, thrusting his thumbs into his own chest, “I’m a big winner. A bigly winner. I won the biggest competition you can enter — other than The Apprentice of course — and guess what? I’ve never once been captured in war. So…”

Reporters asked if Mr. Trump felt his disdain for prisoners of war was insulting to all veterans because any one of them could be captured at any time. Trump, sniffing and snorting, shook his head emphatically.

“No, I think our soldiers, sailors, pilots, and everyone in the armed forces gets me,” Trump said, “and they understand that I honor all veterans. But I think they also understand that I like honoring the veterans who were never captured more. It just makes sense, doesn’t it?”

Asked for comment, Sen. Lindsey Graham (R-SC), himself a veteran and someone who was extremely close with the late Senator John McCain (R-AZ), himself a prisoner of war during the Vietnam War, said he was “disappointed” in Trump’s comments but also said that he “wants to win another election” and Graham “needs Trump’s endorsement to win” so he was stuck between “a rock and his principles.” Sen. Graham also said he looks forward to helping Trump “plot meaningless wars.” Graham told reporters that “as long as the country is at war within the next six months of Mr. Trump’s presidency that “everything will be magically better in America forever and ever.”

WASHINGTON, D.C. — President Donald J. Trump is going to sue you if you ...

Trump to Give Robert E. Lee Posthumous Medal of Freedom

WASHINGTON, D.C. — President Donald Trump appears to be already jockeying for position in ...