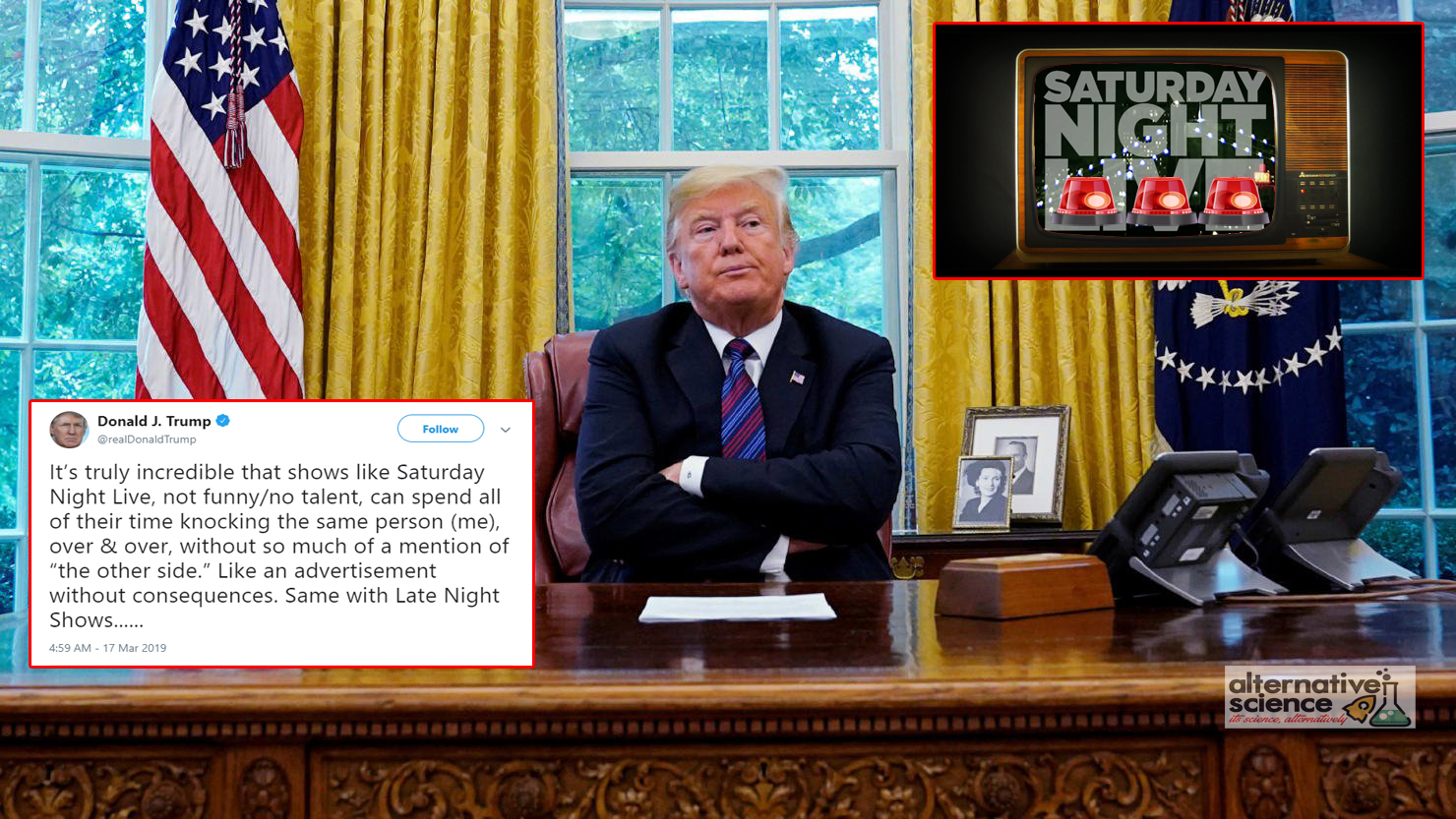 NEW YORK, NEW YORK — Since becoming President, Donald Trump has tweeted his displeasure with the cast and crew of “Saturday Night Live” mocking him on multiple occasions.

Trump attacked the long-running sketch comedy show before he was even sworn-in.

Nothing funny about tired Saturday Night Live on Fake News NBC! Question is, how do the Networks get away with these total Republican hit jobs without retribution? Likewise for many other shows? Very unfair and should be looked into. This is the real Collusion!

This morning, Trump once more complained about how he feels he’s being treated by the cast and crew of the show that has lampooned every president from Ford through Trump.

It’s truly incredible that shows like Saturday Night Live, not funny/no talent, can spend all of their time knocking the same person (me), over & over, without so much of a mention of “the other side.” Like an advertisement without consequences. Same with Late Night Shows……

….Should Federal Election Commission and/or FCC look into this? There must be Collusion with the Democrats and, of course, Russia! Such one sided media coverage, most of it Fake News. Hard to believe I won and am winning. Approval Rating 52%, 93% with Republicans. Sorry! #MAGA

President Trump has attacked SNL more than he rebuked a Saudi prince who ordered the execution of a journalist who had been living in the United States. Trump has been more vocal in his complaints about SNL’s use of the First Amendment to satirize himself and his administration than he has been about white supremacist violence on the rise in the country. In fact, Trump has been more critical of SNL than he has been of even the so-called “MAGA Bomber,” a Trump supporter who sent bombs to several prominent Democrats.

In response to Trump’s repeated complaints, executives at NBC and the producers of SNL announced this morning that they are going to alter the show’s broadcast slightly to accommodate the man who will soon be the most powerful person in the world.

“Clearly we have a massive triggering effect on Mr. Trump,” SNL co-executive producer Haley Miles told reporters during an early Sunday morning conference call, “and so we’ll be adding a Trump Trigger Warning to every broadcast of our satirical comedy show that has lampooned every president since it began in 1975. ”

NBC’s Deputy Chief in Charge of Late Night Programming told reporters during the call that the network and the people who run SNL feel they have a “duty to protect the country and indeed the world from the ramifications of Trump’s tantrums.”

“When we trigger Trump, like we so clearly can by simply pointing out how obviously ill-prepared and unconventionally weird his term has gone thus far,” Miles said, “who knows if he’ll get so mad he slams his fist down on the desk and accidentally hits the big red button? I won’t be able to sleep at night if we do a Trump cold open and wake up to find he’s nuked New York.”

Beginning with next week’s broadcast, Seaborn said, just before the show begins with its signature “cold open” sketch that traditionally ends with someone or some people shouting, “Live from New York, it’s Saturday Night,” a white screen with red text will flash up, alerting President Trump to avert his eyes and ears. Seaborn said the full text of the trigger warning hasn’t been finalized, but he said he and SNL producers have a general idea about what it should say.

“Obviously these warnings would also let the rest of the world know the most powerful man in the free world is about to have a massive meltdown and tantrum and they should seek shelter until the morning hours come,” Miles told the press.

“Obviously, his hands aren’t the only tiny thing he has,” Miles said, “because his sense of humor seems to be completely missing. But that’s okay. He’s not the first totally thin-skinned autocrat who wants to silence dissent with fascistic tantrums. Depending on how he governs, he might be the last, but we’ll cross that bridge when we get there.”

Mr. Trump could not be reached for comment as he was in a Twitter flame war with a 22 year old stand-up comic from Long Island who called him an “orange bag of diarrhea and Swastikas.”

This story first appeared on The Political Garbage Chute.

ANASLIME, CALIFORNIA — Today, Disney announced that Bob Iger would be stepping down as ...