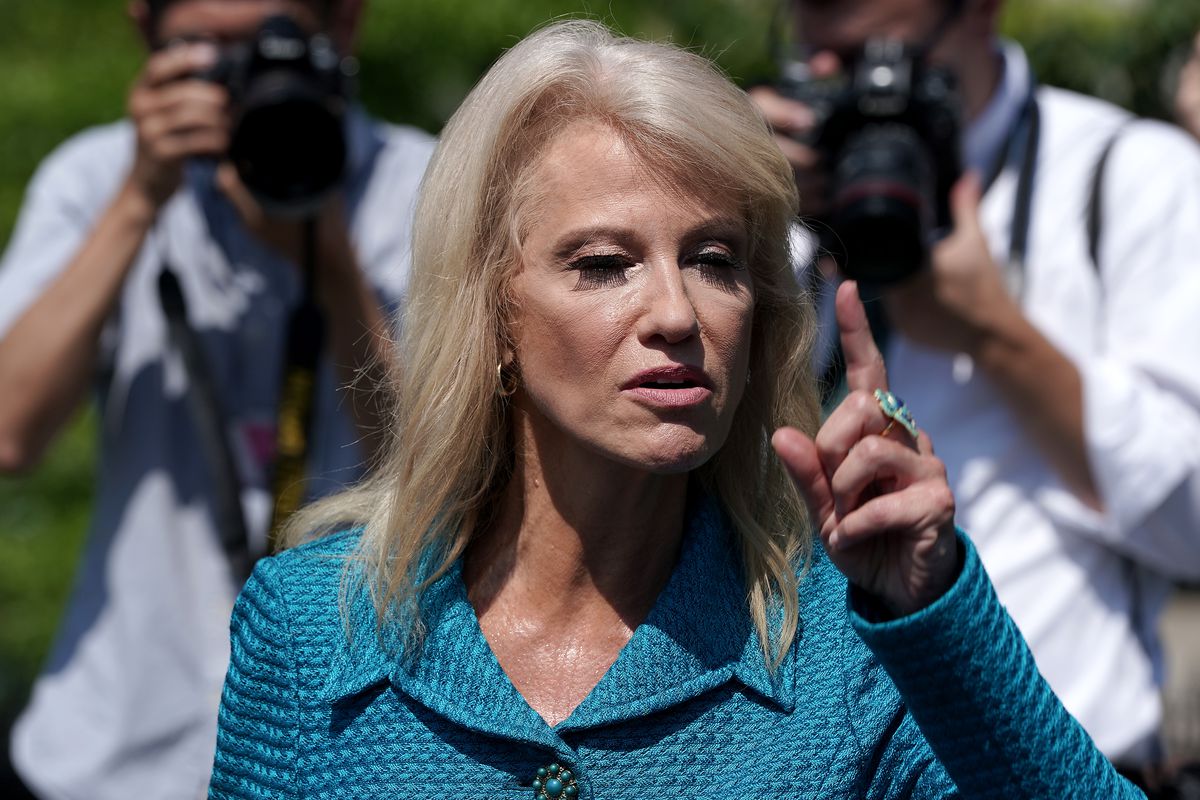 WASHINGTON, D.C. — Senior mendacity adviser to the president, Kellyanne Conway, told reporters tonight that fans did not boo Donald Trump during Game 5 of the World Series between the Washington Nationals and the Houston Astros. Instead, Conway says that fans were dong an “alternative cheer” for him.

“Excuse me, excuse me. But why you so-called reporters asking me so-called questions about so-called things that happen to and about this man I so-called work for? What’s all your ethnicities,” Conway began her impromptu presser. “Never mind that now, we’ll get it from you later. The point is, here we are talking about a non-story, again. Just like the whole collusion with Russia thing, or the collusion with Ukraine thing. It’s all a lot of fake news. They weren’t booing the president. They were alternatively cheering him.”

Ms. Conway was summoned to the White House to help President Trump draft an executive order to deport the Nationals and their fans — all of their fans — to Canada. Trump apparently decided to order their removal from the country when he found out they had previously been the professional baseball team of Montreal, Canada. The Expos left Montreal years ago, but tonight Mr. Trump felt so insulted by hearing people boo him, that he decided they should be deported.

“I know he said he was deporting them because he got booed. But I’m telling you, he never said that,” Conway said. “Sure you heard it with your own ears, and saw it with your own eyes, but that’s not the point! You have to ignore what you know you saw and focus only on what I tell you that you saw. Got it?”

Shooing the press out out of the Oval Office, Conway kept talking to reporters as she left the president to finish up after the executive order signing ceremony.

“The simple truth is that what sounded like boos were actually a chorus of Trump loving, super patriotic Americans wishing our dear president a Happy Halloween season,” Conway explained. “But since time is money, and everyone wanted to get back to focusing on the baseball game, they decided to say Happy Halloween in ghost language. And well know ghosts say what? They say, ‘Boo!'”

Chants of “lock him up” could also be heard coming from Nationals fans. Conway was asked about the chants.

“Huh? I can’t hear you. What did you ask me about? All the people chanting, ‘Lock him up for another perfect four year term,'” Conway asked rhetorically. “Yeah, that was great, wasn’t it? Just great.”

Just then, Conway slipped in a puddle on the White House lawn.

Conway was pointing at the moon.

Ms. Conway stretched a bony finger down toward the very green grass.

“There it is. There’s the moon,” she said, pulling out her trusty crack pipe and taking a hit. “Ahhhh. That’s better. Sweet, sweet, life affirming crack. Gotta have it. You just gotta have it. I know I do at least. You know, to work here. Day in and day out. Never hitting rock bottom. Just continually and continuously pile driving this administration further into the abyss of a kleptocratic kakistocracy. Anyway, I hear my crack pipe calling me from my pocket again, so I’m going to go listen to some country music, smoke this crack, and see what shakes loose after that. Take it easy, everyone.”

The White House did not comment on this story.

HOUSTON, TEXASS — Major League Baseball’s Houston Astros have reportedly reached out to the ...