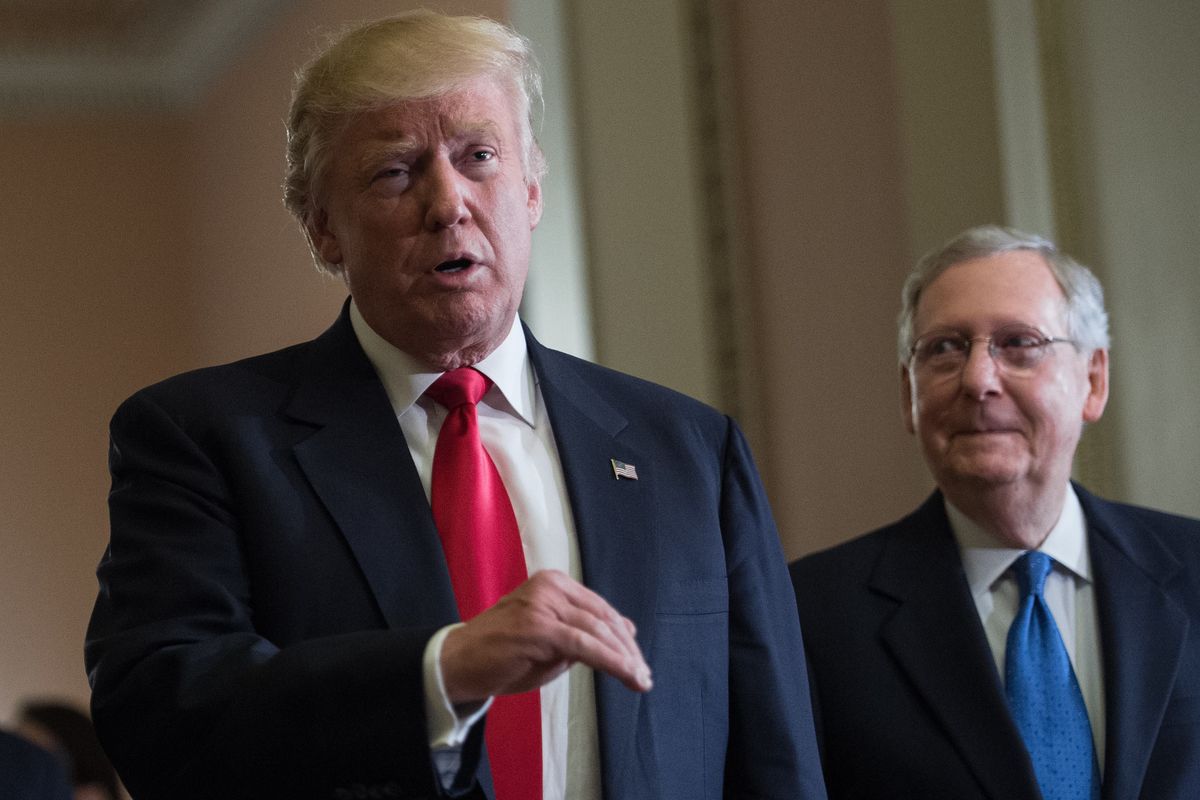 “I get the distinct impression my friends across the aisle think that I think President Trump is above the law, and that’s just so wrongheaded I cannot begin to tell you,” McConnell explained. “Sure, he’s denying the Democrats oversight into his administration that I would literally be foaming at the mouth to impeach the previous black administration over, but I don’t think that. No one’s above the law.”

Pausing to sniff some coal he had in his pants pocket, McConnell saw the reporters were confused.

“Trump’s not above the law,” McConnell posited, “it just doesn’t apply to him.”

The Kentucky Republican, sensing perhaps that his point was still not quite being made clearly, continued.

“What I’m getting at is this — the law isn’t important to Trump,” McConnell said. “No? Still not buying it? Okay, um, oh! Let’s try this! So, Trump is NOT above the law, at all, okay? The law just can’t be used to hold him accountable. That makes sense right?”

Reporters were scratching their heads.

“Man! You guys are tough today,” McConnell said with exasperation in his voice. “But I’ll get you there. I’ll get you to understand.”

Leader McConnell removed a hunk of coal from his coat pocket. He put the coal down his pants, and started rubbing it on his crotch. McConnell explained that’s how he does his best thinking.

“Ah! I got it! Ready? This one will really make it all crystal clear to you folks, I’m sure of it,” McConnell said, a smile creeping across his face. “It’s not that I think President Trump is above the law, it’s just that I think it shouldn’t impact him in any way.”

Trump did a “Ta-da!” move with his hands, expecting applause. When he was met with more silence, he sighed heavily. McConnell rubbed his chin for a moment, black coal ash smearing across his face.

“Alright, I’m gonna try this one more time, you hear me? And then we gotta wrap this up because if I don’t have the blood of innocent brown babies pumped into my tortoise veins every two hours, I die,” McConell said. “It’s part of the deal I made with Satan to stay in power. Anyhow, here’s how I see it: President Trump is not above the law; the is just beneath the office of the presidency. Get it? Got it? Good.”

Reached for comment, Speaker of the House Nancy Pelosi (D-CA) said she’s “so upset” by what McConnell said that she’d “very strongly consider maybe possibly one day perhaps perchance doing something about it.”

“But I’m not sure sure yet,” Pelosi said. “I have to get the polling data back to see if the Constitution is worth enough to the voters for us to defend. Just trust that I know more than you, okay? I’m playing, like 1,398th dimensional chess here, okay? Trump will either rein himself in, or we’ll maybe perhaps probably I hope beat him next year after we spend this year not inspiring our base with political courage to impeach a lawless president. Make sense? Of course it does! I’m Nancy Pelosi!”

Another Story: Trump Asks Supreme Court To Officially Declare Him Above The Law And ‘More Co-Equaler’ Than Congress

Trump to Give Robert E. Lee Posthumous Medal of Freedom

President Trump: ‘I Like Honoring The Veterans Who Were Never Captured More’

WASHINGTON, D.C. — This morning, President Trump paced around the White House lawn and ...

CHAKRA FALLS, IDAHO — Before her appearance on the first televised Democratic primary debate ...