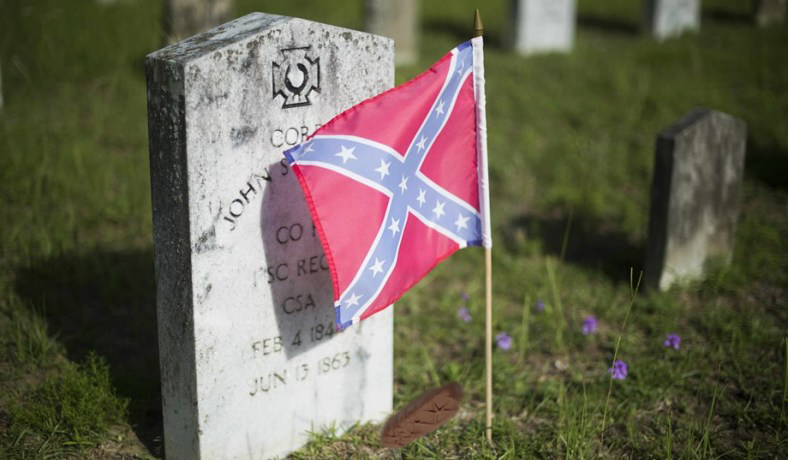 FORT BENEDICT, KENTUCKY  — A man was arrested earlier this morning after someone alerted the police to his Memorial Day tribute to fallen Confederate soldiers.

“At approximately 6:30 in the morning a witness out for their morning jog came upon a man who was crouched down, pants down and his anus exposed, defecating on gravestones of Confederate soldiers,” Officer Juan Caramelo of the Ft. Benedit Sheriff’s Office told media representatives at a press conference. “While we completely agree with the sentiment, because really, the Confederates were literally on the wrong side of history in so many ways, we have laws against public shitery, so he’s been cited and and taken into custody.”

The man, a 38-year-old midling comedian and satirist from California, whose name is being withheld at the request of the sheriff’s department, released a brief statement from his holding cell. The suspect had flown to Ft. Benedict specifically to “take a dump on a few Confederate chests,” the statement indicated. Currently, the alleged comedian sits in a holding cell waiting bail, which will be paid for by his very understanding and lovely wife, who he completely recognizes is out of his league.

“She is rad, and will understand this is the price she pays being married to a guy like me,” the man wrote. “However, I will not now, nor ever, apologize for any of the logs I laid today. Nay, for none of the shites I shat, shall I waver in my dedicated defense. Long though the march to my ultimate vindication may be, I will undertake that journey for the cause is dear, the cause is right, the cause is just.”

At the time of publication, cleaning crews were still rounding up the biomatter left behind by the protester. It’s estimated he’d been there long enough to defecate on approximately 23 different graves. Word is that none of the cleaning crew mind it very much, however.

“Honestly it’s more insulting to me that I have to spend time out of my life every month maintaining the grave markers of men who died so that black people could be enslaved,” one cemetery worker told us on the condition of anonymity. “And honestly? We’re not really taking the poos off the graves; we’re just moving them with a stick as we best we can. Maybe a couple markers got smeared with dookie, who knows, who’s to say? Know what I mean?”

“On the one hand, public defecation is a misdemeanor crime,” Lionel Hutz, Attorney at Law told us via Skype, “and on the other hand, shitting on traitors is the most righteous and patriotic thing you can do, and it’s usually rewarded in our legal system. This is definitely a case to watch.”

The suspect reiterates several times in his statement that he’s only sorry for the people who have to clean up his bowel movements, though he suggests maybe having a few Confederate monument defenders pick it up would be best.

“I mean, at the end of the day, fuck the Confederates. That’s a message I’m willing to pay a little fine for,” the man wrote. “That’s America, to me. Shitting on the graves of literal traitors. Is that a tear in my eye? Why yes it is. A Freedom Tear.”

This story is smelly, and developing.

America has mass shootings. Though, to be perfectly frank and fair, it has racism, ...

Pat Robertson: “If The Florida and Puerto Rico Gays Stop Having the Sex With Each Other, We Might Stop Hurricane Dorian!”

VIRGINIA BEACH, VIRGINIA — Televangelist Pat Robertson told his telecongregation this morning that he ...

There are certain words in the English language that are categorically terrible, stupid, idiotic ...