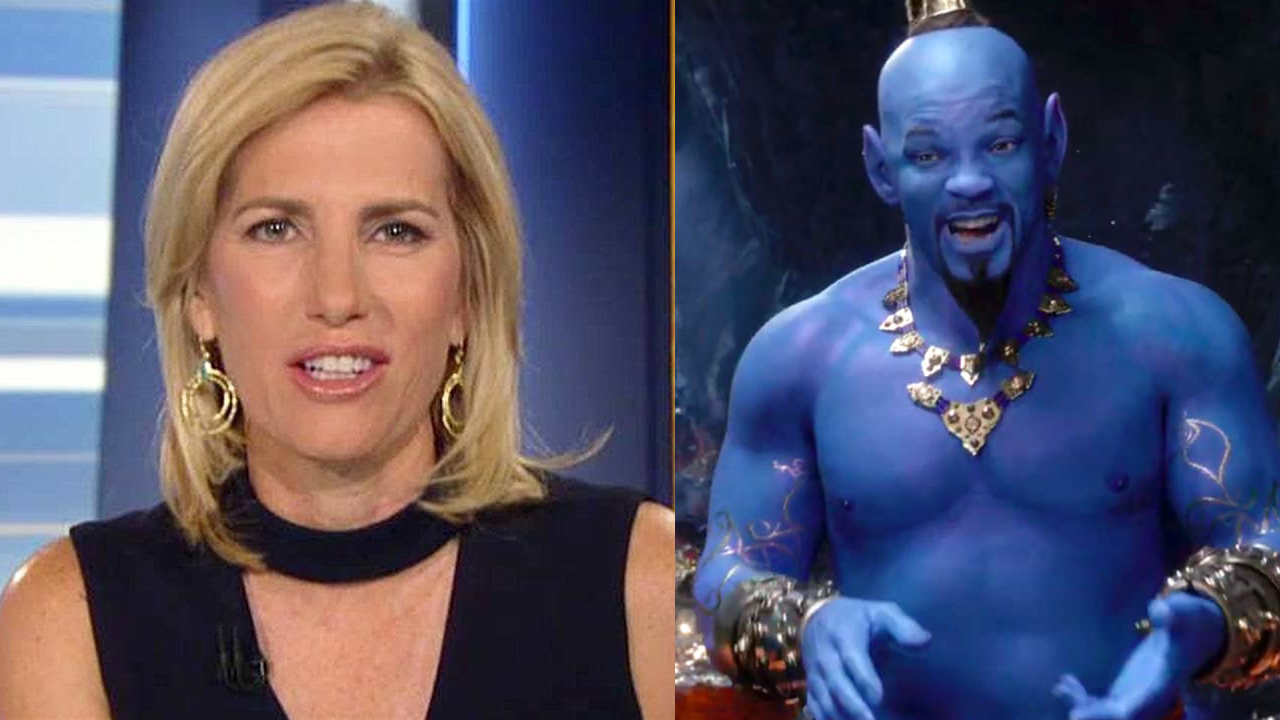 NEW YORK, NEW YORK — Fox News host Frau Laura Braun Ingraham is not happy about the new live action remake of the classic animated Disney film, “Aladdin,” and she’s telling everyone she can about it, including listeners to her new podcast. On the podcast, called, “Fast, Foxy, Fascism,” Ingraham blasted the decision to cast Will Smith in the role of the Genie.

“First of off, that role was played by a white before. His name was Robin Williams, and while I hated him and talked shit about him because of his politics while he was alive because he was a libtard,” Frau Ingraham began her rant, “he was white and therefore on some level I simply MUST defend him.”

Ingraham says that choosing to cast Smith instead of a white person “effectively blackwashes white history.”

“Look, we knew that when they Ariel from us that they wouldn’t stop until all the fictional characters were turned into LGTBQOMGLOLWTF or whatever initials they use to abbreviate their group now,” Ingraham said dismissively, “with their radical agenda of wanting to be acknowledges as human beings worthy of equal treatment under the law, and brown skinned. They just can’t let us white folks, you know, the same white folks who liberated them from the slavery other white folks were making them under, have more than 95% of things anymore, can they?”

Ms. Ingraham believes that the casting of Smith is “reverse racist.” Ingraham blasted Disney for “kowtowing to cultural Marxists” in choosing Smith to voice the Genie.

“What’s next? Not casting a real dragon in the Mulan remake? Are they going to change the spots on the 101 Dalmations,” Ingraham asked with sarcastic incredulity. “What kind of country do we live in if artists can just change the races and attributes of made-up characters without getting white people’s permission first? That doesn’t seem like the America I know and love. It sounds awfully, you know, PIGMENTED, if you ask me.”

Ingraham says that if Disney was “interested in fairness,” they’d do a “1-for-1” when they change iconic characters from previously released material.

“Give us one for every one you urbanize. Is that so hard to do,” Ingraham asked with tears welling up in her eyes. “Won’t someone think of us poor, picked on white folks?”

“You know, I often find myself on the toilet during Executive Time wondering why come Hollywood doesn’t make things whiter,” Trump told reporters in the Oval Office, “because there are more white people here, which to me means that white is more American than all the non-whites. It’s just math people, not my racism, trust me. So I think my good friend Laura is bringing up some very interesting and valid things here, and I have ordered my personal attorney William Barr to investigate Disney’s criminal reverse racism.”

Another Story: Fox News’ Lahren: “Mermaids Are White, Just Like Santa And Jesus!”

Around this office, we’re big fans of cute little kittens. You could say we ...

HOLLYWOOD, CALIFORNIA — Reports out of Tinseltown are that a new remake of a classic ...

EL CHINGADERO, TEXAS — All across America, “escape room” businesses have been cropping up. ...