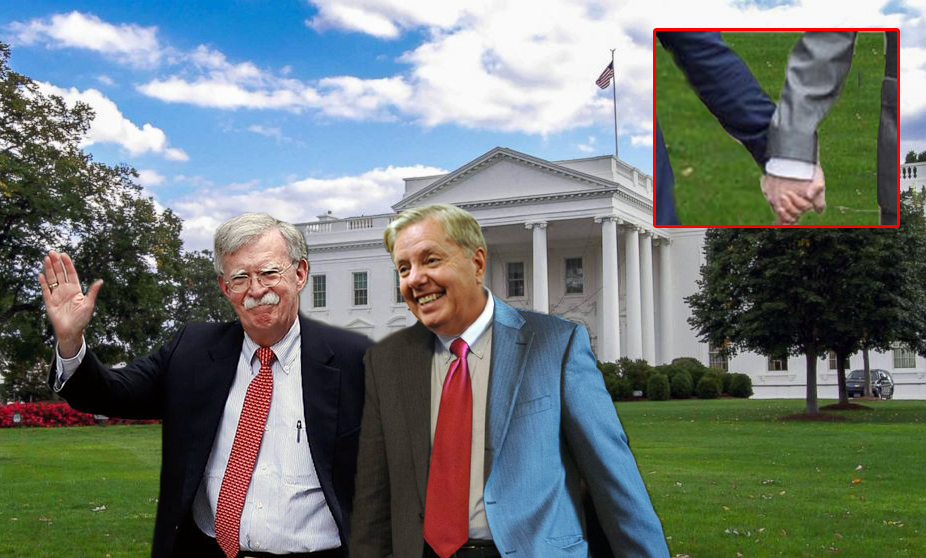 WASHINGTON, D.C. — Photographers in the nation’s capital captured an intimate, and what one administration official later called a “truly adorable” moment in “modern day barbarism” today in the White House garden. Senator Lindsey Graham and National Security Warmonger John Bolton were seen strolling around the gardens at the presidential residence, a hired string quartet playing “Gimme Shelter” by the Rolling Stones playing beautifully as they walked and talked.

“John, I gotta tell you. I may have publicly blasted that unctuous moron time and again when I was running against him for president,” Senator Graham told Bolton, “and I may have been telling the unvarnished truth about him then, but right now, that white collar crook sonofabitch as my war boner a-howlin’ somethin’ fierce! This whole Greenland thing — brilliant!”

Bolton could barely contain his own excitement.

FACT CHECK: Is The Babylon Bee Being A Whiny Little Bitch?

“Oh! You’re so right, Senator,” Bolton began, “That sly idiot with an IQ just south of his shoe size divided by four just opened the door for us to invade Greenland. Genius.”

The two men paused for a moment. They each took a deep breath, letting them out in a slow, grateful manner. Bolton and Graham each shifted their quickly turdigifying crotches and walked on a bit more.

“Exactly right, John! Exactly right! I’m so glad to have found another aging warhawk named John to glomb onto. Frankly, the orange dick wart can be a bit much,” Graham said, “and you remind me of an old, dear friend, because you, like we, understand that the only pretense you need for war is war itself.”

Mr. Bolton, part of the braintrust that helped champion perhaps the most successful, worthwhile, and righteous endeavor the American military has ever undertaken — the Iraq War — wiped what looked like a tear of pure joy from his right eye as he removed his glasses. Graham paused, caught up in the emotion of the moment. The quartet played on.

“So,” Bolton said after he had regained some control of his swelling emotions and racing heart, “Denmark tells us we can’t buy Greenland. Then we – ”

“…point our big, strong, agile, firm, stiff, rigid, taught, missiles at those European socialist cucks,” Graham nearly shouted. “We tell them, sell it to us for a dollar, you commie pieces of crap, or we bomb the aebleflæsk out of your bitch asses!”

“Can you imagine it, Graham asked Bolton. “John, just picture it. Our tanks rolling in on those freeloading, welfare nanny staters who actually live a much less stressful, happier version of our mixed economic model? Think of all the socialists we’ll convert to capitalism with our waterboarding and making them watch Rocky IV over and over until they realize they’re Ivan Drago?!”

“We’ll be liberators. Again. Freedom will spread. Again. Democracy will win because we will impose our will on people who didn’t ask for our opinions in the first place. Again,” Bolton said with passion and fervor. “Amen!”

Graham wiped his own joyful tears away now.

“It’s almost…too easy, isn’t it Senator? It’s like something out of the wettest, creamiest dreams I’ve ever had about sending someone else’s working class children to die and kill other working class children,” Bolton said, not even trying to hold back the raw emotion in his voice. “It’s just…beautiful Lindsey.”

Suddenly, the two men realized that their high-five had never fully ended. There they stood, hand-in-hand, just smiling at one another. They could smell each other’s aftershave and nearly taste each other’s toothpaste. The quartet swelled.

Bolton and Graham were last seen skipping off toward the Situation Room, hands still locked tightly together, giggling all the way.

Grassley Warns Kavanaugh: “Another 60 or 70 Sexual Assault Allegations Might, Maybe, Could Make Us Wag Our Fingers At You”

Trump: “I Wasn’t Trying to Intimidate Yovanovitch, I Was Trying To Scare Her Into Shutting Up!”

WASHINGTON, D.C. — During the first part of Ambassador Marie Yovanovitch’s testimony in the ...

LONDON, ENGLAND — The American president’s state visit to the United Kingdom is not ...