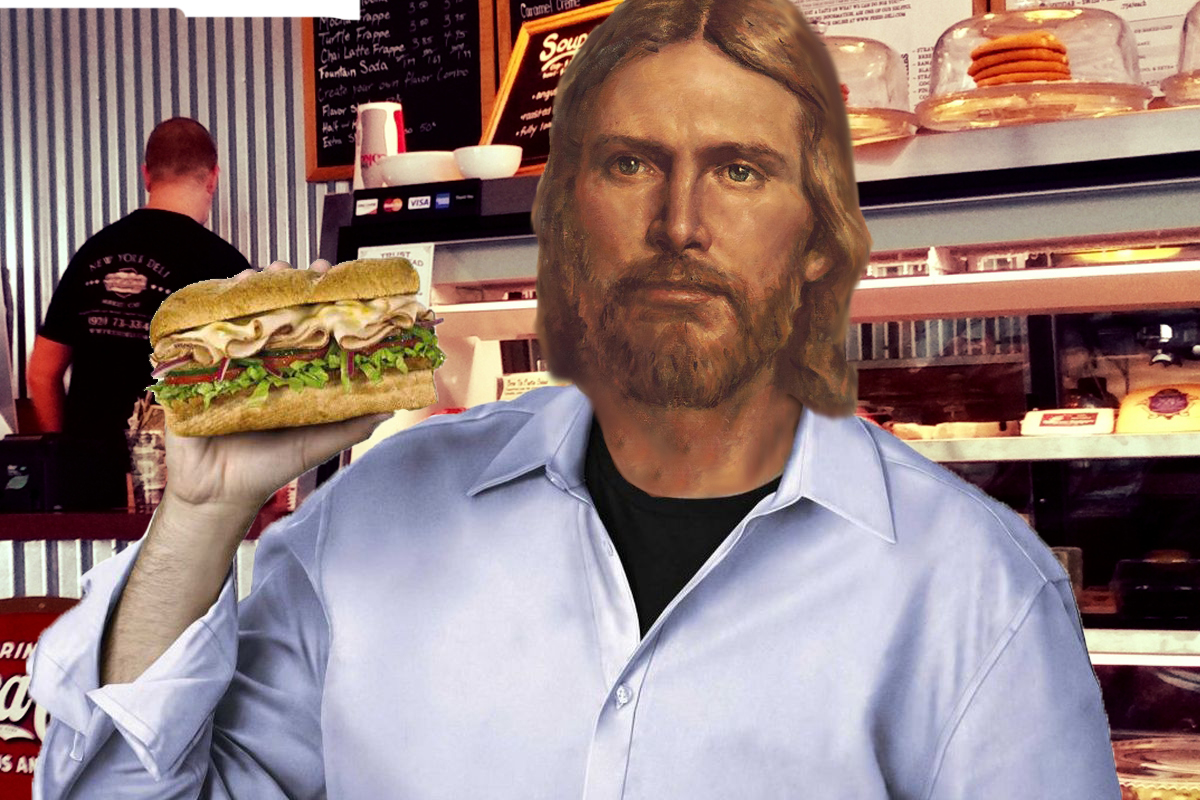 BUFFALO, NEW YORK —  The Bible foretells that when the End Times are upon us, that God’s only begotten son, Jesus Hubert Christ, will return from the Kingdom of Heaven and lead the armies of God to victory against the forces of Robert “Bob” Satan, a disgruntled former employee of God’s. However, when Christ was recently spotted at a deli in upstate New York, he was taken aback by questions about the coming end of days. Christ insisted that he was only back on Earth “for a quick bite.”

“Oh, I’ve coming back to Earth alright,” Jesus told people as they flocked to him, “but I’m only here to try another one of this place’s awesome sandwiches, and then I’m going back up to take fat bong rips and watch reruns of You Can’t Do That on Television. Man, do I love 1980’s era kids’ sketch comedy shows!”

Jesus Writes Op-Ed In Favor Of Removing Trump From Office

The Son of God said that “people down here on Earth need to stop worrying” so much about when and if he’s coming back down to lead his father’s angelic army and focus on what he told them to do two thousand years ago.

“That’ be nice to each other and treat the lowest among you like you would the richest of men.,” Christ reiterated. “I see a whole shit ton of people seem to have forgotten all about that part of my teachings and focused completely on just believing in me and letting my sacrifice wash away all their sins. Which is, you know, fine. Do what you want, but those are the kinds of people who end up being the most preachy and judgmental. Gross. Stop that.”

Taking a big bite out of his sub sandwich and letting a big smile stretch across his holy face, Christ said that he doesn’t really like to get involved in politics, and that’s why if a political candidate ever claims Jesus himself told him or her in a dream to run that humans can “can consider that utter and complete dog shit lies.”

Jesus told everyone he was tired of talking about politics. He just wanted to enjoy his sandwich. He gave high praise to the people who made it.

“Oh, man, Dad damn that’s a good sandwich! Just the right balance of meats, cheeses, veggies,” Christ said, licking his lips. “This sandwich is so good it makes me – ”

Jesus stopped for a second, noticing his hands were red. He opened the sandwich up.

“I told them to hold the…oh, I see,” Jesus said, laughing. “Stigmata. Fools me every single time.”

Jesus told everyone that this wasn’t his second, third, or even fiftieth coming. He said he’s been coming back “pretty regularly” since about the sixteenth century. Christ always comes in disguise, though, so he’s not easily spotted. Today, he realized his disguise wasn’t that effective when someone recognized him.

“I like to come down and try a new sandwich from this place every couple of months, actually,” Christ explained. “Sometimes I’ll pair with a nice hot cup of Matey Soup — that’s what I’ve called tomato soup since I baby…you know, in the manger or whatever. But today’s a little warm out for a cup of soup, so I opted for the turkey and swiss combo. They make their own chips here. So. Fucking. Tasty. Can’t say enough about their house-made chips, for reals.”

After he’d finished his sandwich and chips, Jesus thanked the staff of the deli by waving his hands around and magically cleaning everything up for them. Christ told everyone he’d see everyone again soon. Then, with a wrinkle of his nose, he jumped up, up, up into the air, and vanished many miles above the planet’s surface.

MEADOWBURGH, MICHIGAN — If she would have known 15 years ago that her husband ...

WASHINGTON, D.C. — The list of people, businesses, and government officials who President Donald ...