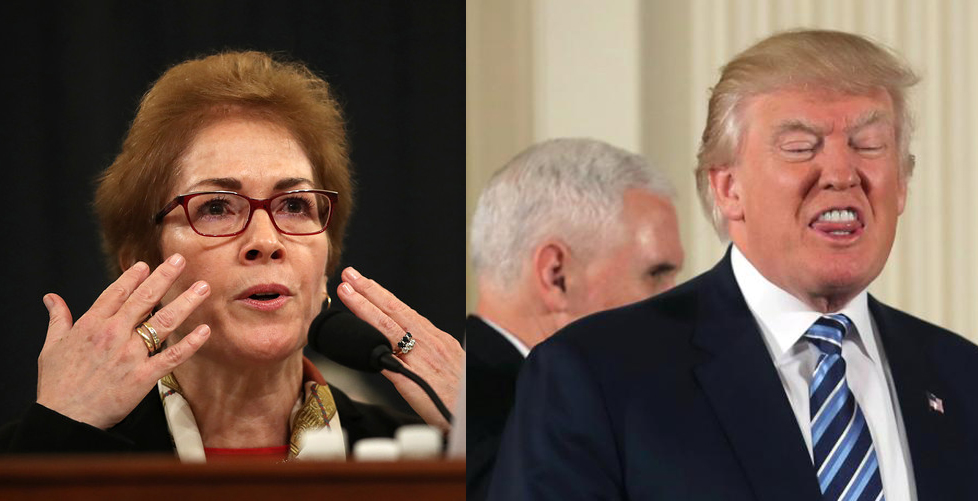 WASHINGTON, D.C. — During the first part of Ambassador Marie Yovanovitch’s testimony in the impeachment hearing conducted by the House Intelligence Committee this morning, President Donald Trump attacked her on Twitter.

Tweeting to his nearly 67 million followers, Trump pinned the decades-long strife in Somalia on Yovanovitch, who served one of her tenures as ambassador there. Trump said “everywhere Yovanovitch went turned bad.” Trump blasted Yovanovitch, and she was given a chance to respond in real time by Committee Chair Adam Schiff, who characterized Trump’s tweets as “witness intimidation.”

Jim Jordan: “President Trump’s The Kind Of Sexual Predator I Have A Duty And Instinct To Protect At All Costs”

Trump’s tweets about Yovanovitch, below:

….They call it “serving at the pleasure of the President.” The U.S. now has a very strong and powerful foreign policy, much different than proceeding administrations. It is called, quite simply, America First! With all of that, however, I have done FAR more for Ukraine than O.

While the president’s regular team of defenders quickly sought to downplay the tweet as Trump merely defending himself, he received healthy criticism for it from both sides of the aisle. Ken Starr, the special prosecutor involved in Bill Clinton’s impeachment, said on Fox News that it was “injurious” to Trump for him to tweet like that at Yovanovitch, especially during her testimony. Former Republican and still current Congressman Justin Amash implied that the tweet would be used to add an article of impeachment for “witness tampering” to any such articles leaving the committee.

Expect witness tampering to be an article of impeachment. https://t.co/HtcXcbVgms

Perhaps sensing that the tide of public opinion could turn against him for his attacks on Yovanovitch, President Trump stormed out onto the White House lawn and began to bark and shout at reporters.

“First of off, I want to say that this witch hunt is really hurting my feelings, okay? Let’s just make that very clear, because it’s why I tweeted about Yovanovitch. My feelings were very hurt,” Trump said.

Trump told the media that it “isn’t fair” to characterize his tweets as witness tampering or intimidation. He admitted that he insulted Yovanovitch, and he further admitted that he was “absolutely” trying to influence the country’s opinion of her. However, he said it was “completely and totally wrong and stuff” to use the terms “witness intimidation” or “witness tampering.”

Farting super hard, Trump seemed to be working on another thought.

“I also want to just point out something that I think isn’t talked about enough. Me. My feelings,” Trump said. “I know I just talked about my feelings, but let me talk about them some more. Why doesn’t the Constitution say my feelings have to be taken into account in any impeachment hearings against me? Doesn’t that sound to you like the founders were part of the deep state? It does to me. And I’m pretty smart, I think. Other people tell me I’m smart, and just because I pay them money to tell me that, I don’t think that means I can’t trust everything they say to me.”

Trump pulled a piece of fried chicken out of his suit coat. He began eating it voraciously.

“This is such bullshit, okay? I get impeached, but Obama gets to be black and a Democrat for eight years and nothing on him? Bullshit,” Trump said, shoving more chicken into his maw. “What about Clinton? Not even Crooked, I’m talking about Bill. He was impeached because he got a blow job in the Oval Office, but Ivanka hardly comes and sees me in the Oval anymore, so they can’t even get me on that! Again, sham! WITCH HUNT! FAKE NEWS! BOB MUELLER’S 2.3 TRILLION ILLEGAL MEXICAN ANGRY DEMOCRATS DANCING ON 9/11! Did I forget anything that will trigger and rile up my base?”

“No? Okay,” Trump said, “I’m gonna go back inside and have some executive time. They tell me the toilet’s fixed now so I’ll be able to watch the rest of these witch hunt hearings in peace and quiet.”

WACO, TEXAS — Ken Starr became a household name while he was the Republican-picked ...

Mexico Starts GoFundMe For Its Own Wall

WASHINGTON, D.C. — The Attorney General of the United States has issued a formal ...

MERRY OLD LONDON TOWN IN JOLLY OLD ENG-UH-LAND — British Ambassador to the US, ...

WASHINGTON, D.C. — President Donald Trump appears to be already jockeying for position in ...