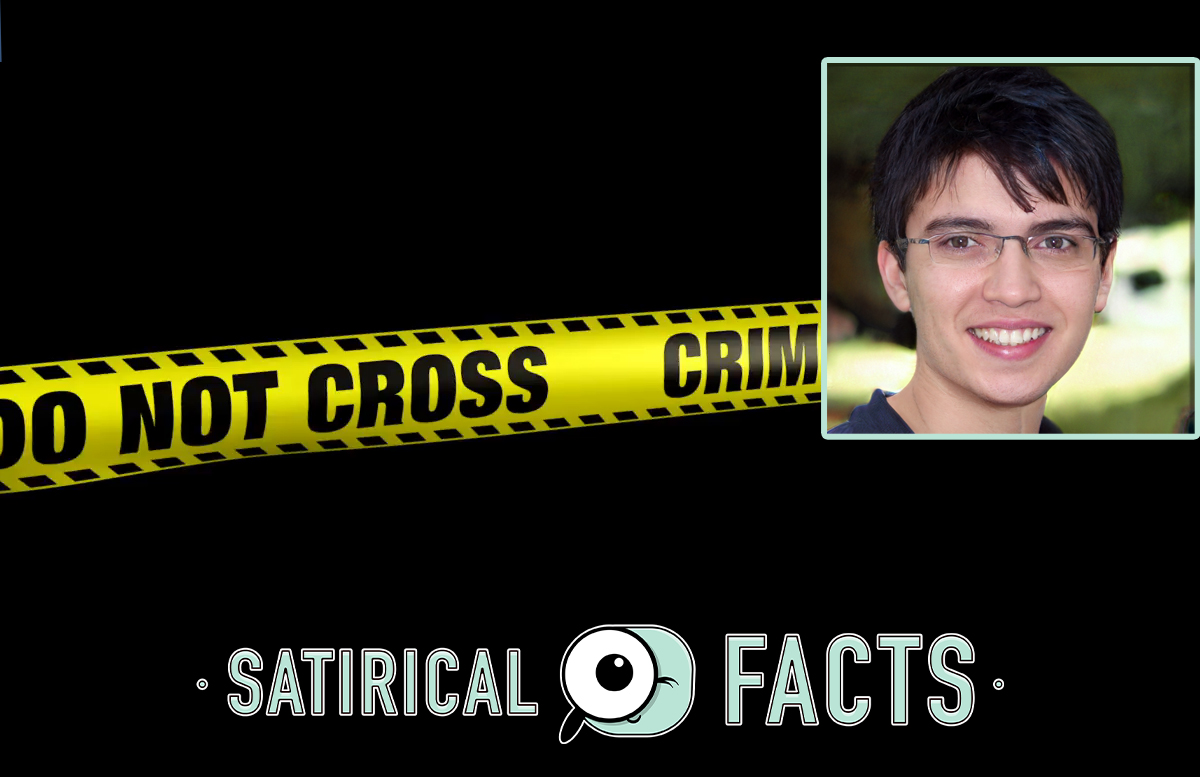 EMPTY HOLLOW, CONNECTICUT — This weekend, CBS News reported that by September 1st — 244 days into 2019, there had been 284 mass shootings. This is a pace that would see well over 400 mass shootings by the end of the year. However, to some, like right-wing commentator, author, and laterally lisping lapboy of disgraced former Secret Service member Dan “Salad Bowl Head” Bongino Matt Palumbozo, it’s still “far, far too soon” to talk about what kinds of gun control measures might help stem the rising tide of mass shootings.

When he started his libertarian Facebook page, Palumbozo tells us he was “first and foremost concerned with liberty” and one of the issues he considers most strongly related to liberty is that of firearm ownership. Palumbozo recently sat down with one of our reporters and explained why he thinks that even after there have been 284 mass shootings in under 250 days, it’s “too soon,” as he describes it, to talk about gun control.

“First of all,” Matt said with a finger raised, “can you show me any examples of gun control ever working?”

When our reporter raised the issue of machine guns — or fully-automatic firearms — having been all but banned by way of the Firearms Act of 1934 that made it extremely difficult to obtain a government license to own an automatic weapon, Palumbozo blinked twice.

“Yeah,” Palumbozo said, “but you could still like source all the parts and make your own machine gun, so whatever.”

Next, Matt said that even though one could “easily be alarmed” by the fact that there have been more mass shootings than days in the year, “people should realize sometimes they consider things like domestic disputes mass shootings, just because there are multiple shooting victims.” Matt said “statistically it’s so rare to be in a mass shooting” that “people shouldn’t worry about them” except, he says, “to worry about them enough to become so paranoid about them that you buy tons of guns to make yourself feel safer.”

“Why can’t I have it both ways,” Matt asked, “why can’t I both state as fact that shooting deaths in general are so rare as to not worry about them, but also make you believe that the only way to protect yourself against one of these super rare events is by having more guns than the U.S. Army?” Mr. Matt went on to explain that the rarity or frequency of mass shootings “shouldn’t matter anyway because the Constitution.”

When asked if he thinks Americans should go back to having their doctors practice medicine the way they did when the Second Amendment was written, Matt called our reporter a “statist” and said “only liberals would try to rob me of my right to own every piece of weaponry I want for whatever reason I want.” Matt said he was “sick and tired of being called childish just because [he] demand[s]” everything he wants “and also demands [he] not have to show any responsibility” when he does get what he wants.

“The bottom line to me,” Palumbozo said, “is that until you can produce a study that shows me 100% of gun crime is resolved with gun laws, I think there should be no laws considering guns on the books. Just like how murder laws stop all murders and rape laws have made it so that rape almost never happens, legitimate rape anyway. Being a Men’s Rights Activist I also strongly believe that rape is mostly a made up problem in the heads of feminists, and not an under-reported nightmare of a crime like facts and reality would seem to dictate.”

As the nation, and indeed the planet, attempts to grapple with how to recover ...

Donald Trump Jr. Enrolls at Electoral College to ‘Learn to Become an Electrician’

Okay, America. Maybe it’s time to slow down a little bit on the mass ...

FORT BENEDICT, KENTUCKY  — A man was arrested earlier this morning after someone alerted ...