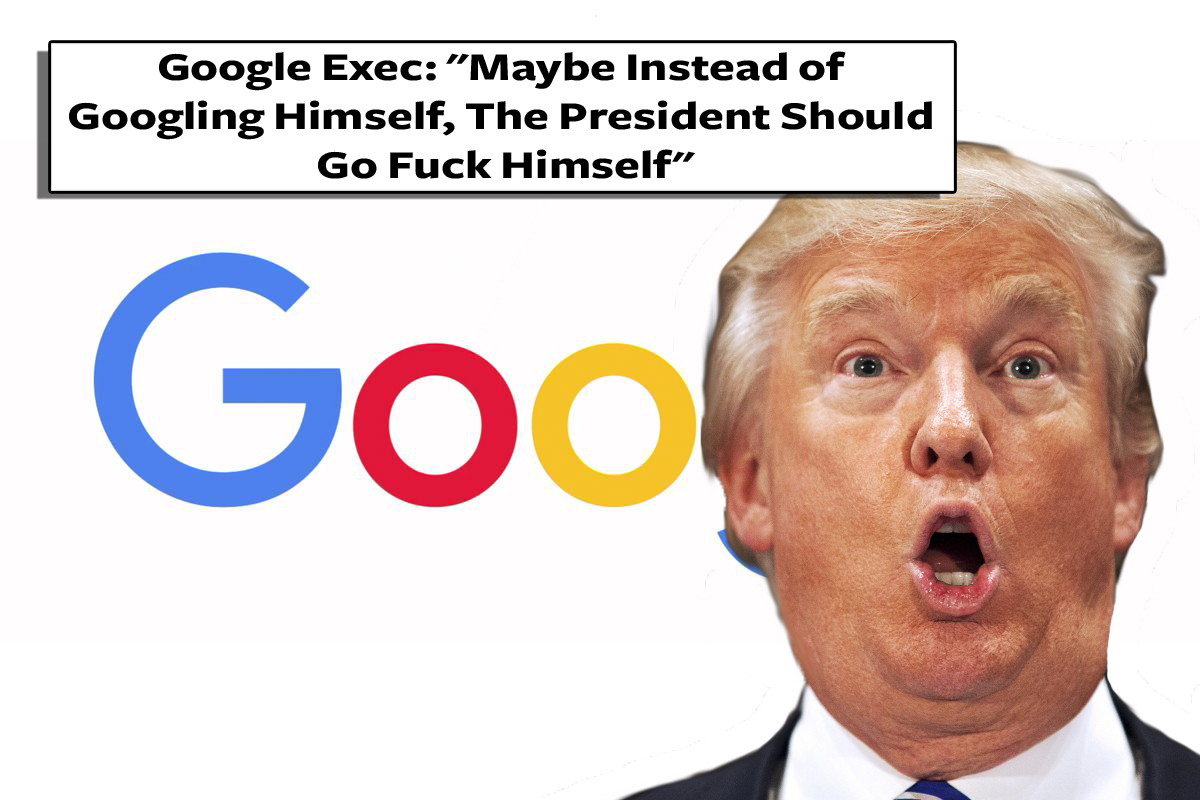 SWILLYCORN VALLEY, CALIFORNIA — Yesterday, President Donald Trump stepped up his attacks on social media and tech giants on Twitter, accusing Google of having their search results “RIGGED” in a way that only shows users negative news stories about him.

In a pair of threaded tweets, Trump blasted Google because when he searched the term “Trump News” the results he got were “only the viewing/reporting of Fake News Media.” Though it’s been hard to pin the president don’t on exactly what qualifies as fake news, one consistent factor seems to be whether the story paints Trump in a favorable light or not. He has yet to, for example, call a story that flatters him or focuses on something he considers an accomplishment “fake news.”

….results on “Trump News” are from National Left-Wing Media, very dangerous. Google & others are suppressing voices of Conservatives and hiding information and news that is good. They are controlling what we can & cannot see. This is a very serious situation-will be addressed!

It didn’t take long for someone at Google to fire back at the president.

“First of all, I would say it’s obvious that someone needs to sit the president down and explain to him how algorithms work,” Gary Glinderson, Deputy Chief Media Officer for Google, told reporters during an investor call today. “And after they waste a good two or three years trying to do that, maybe instead of Googling himself, the president should go and fuck himself instead.”

After a pause, Glinderson added another thought.

“Then again, with Ivanka’s clothing line shut down, she does need work,” Mr. Glinderson posited. “I’d hate to put yet another Trump out of work. We all know what happens when they don’t work for too long; they start following racist rumors about presidents and birth certificates, and then they wind-up president.”

“And we just can’t stomach another Trump in the Oval Office,” Glinderson said. “Besides, it’s not Google’s fault this dipshit doesn’t get that all we do is show people the most popular, most trustworthy, most read news stories. If that gelatinous sack of dick were to, oh I don’t know, go a few days in a row not being a total embarrassment, obvious conman, or disgusting shill for thinly veiled white supremacy, he might start to see more favorable news stories.

Before handing the microphone back to Google’s CEO, Ginderson made one more statement.

“I’m sure Nixon wasn’t happy about all his negative press attention, and I’m pretty positive Mussolini, Stalin, Hitler, all only wanted good things said about them in the press, which they also attacked,” Ginderson said. “So yeah, who gives a shit if a seventy year old man doesn’t get how the Internets work? I know I don’t. Do you?”

WASHINGTON, D.C. — While there has been much buzz and speculation about the Trump ...

After years of speculation and wonder, scientists at a leading research lab have published ...

WINDY FALLS, MINNESOTA — For years, Commander Glenn Mitchum has dined out on the ...

Future SpaceX Projects Will Be Funded With Sales Of New Cologne: “Elon’s Musk”

This morning, billionaire entrepreneur and inventor Elon Musk watched another one of his SpaceX ...