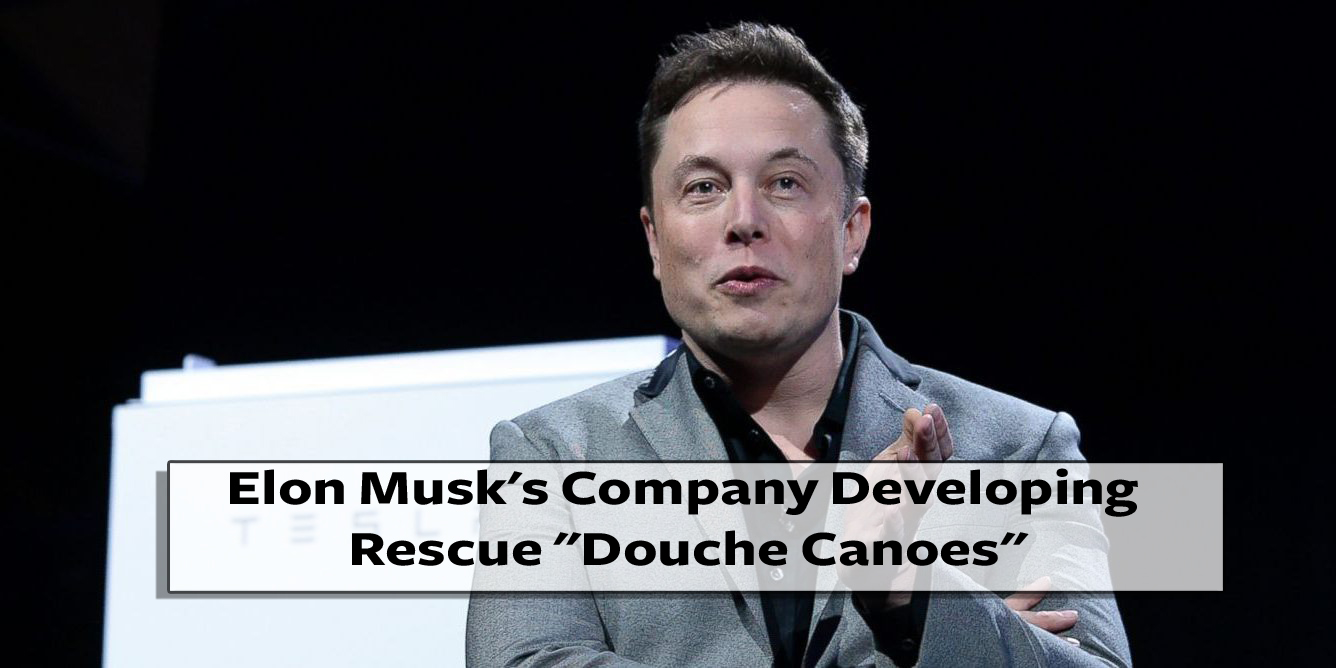 SWILLY CORN VALLEY, CALIFORNIA — Billionaire tech guru and leading Republican PAC donor Elon Musk has announced that he and his Boring Company have decided to push forward with another option for dangerous sea-based rescues of people trapped in caves, despite the Thai soccer team having been rescued already.

This new development comes as Musk is still facing social media fallout over a quizzical tweet he sent that accused one of the British divers that rescued the Thai boys a pedophile. Mr. Musk had seemingly taken offense that the diver in question, Vern Unsworth, discredited Musk’s design for a rescue pod. Musk lashed out in a pair of tweets, accusing Unsworth with absolutely no evidence of pedophilia, and that Unsworth’s molestation of children is what had him Thailand to begin with.

Unsworth has since threatened legal action against Musk, and the offending tweets, seen below, have been deleted by the billionair.

Despite the fact that his first design wasn’t ultimately used, Musk told those attending a press conference held by the Boring Company today that they were “pressing forward” with their plans to build an even newer design of rescue craft.

“Yeah right, so I figured that if I create a rescue craft now, it would be just as effective, necessary, and wanted as the first one I offered up,” Musk told investors. “So we’re going to go ahead and do that, with the Boring Douchecanoe line of rescue watercraft.”

Musk gave some high-level details of the rescue canoes.

“They’ll be designed to work just like I do — so you know, smugly and as if it’s literally the only thing that could possibly work,” Musk explained. “And we’re working really hard for it to go to market with a group of super fanboys who Stan uber-hard for it, no matter how douchey it is.”

Just what will make the canoes douchey, one might wonder. Musk gave some basic details on that as well.

“Well, for starters, again, they’ll come off the line with a really misplaced sense of superiority,” Musk said. “They’ll also only show up when the fame and media buzz will be at its fever pitch. And of course they’ll take billions in government subsidies to fund, but we’ll be donating a substantial portion of the profits to the political party that allegedly doesn’t believe in handouts. So you know, pretty damn douchey.”

BONE VALLEY, CALIFORNIA — Retail giant Sex Toys “R” Us has announced that they ...

Chamber of Commerce: White Sheet Sales Up 72% Since January 2017

The U.S. Chamber of Commerce announced on Monday that retailers across the country are ...

To Thwart Package Thieves, Next Year Amazon Will Only Offer Shitty Products

There can be very little doubt left at this point that when it comes ...