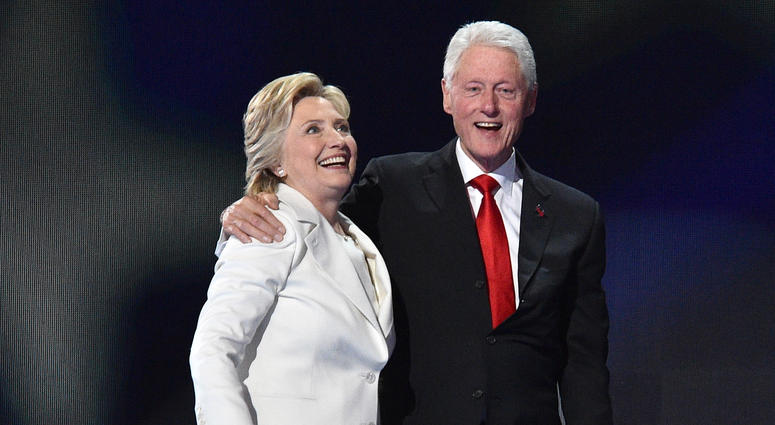 When it was discovered that alleged billionaire pedophile Jeffrey Epstein had killed himself in his federal prison cell, the hashtag #ClintonBodyCount started trending. For those unfamiliar with what it is, the Clinton Body Count is the total number of people that either Bill or Hillary Clinton have ordered killed. Back during Bill’s tenure as president, talk radio DJ and Jabba Hutt impersonator Rush Limbaugh often pushed the conspiracy theory that former Clinton aide Vince Foster was murdered by the Clintons. To this day, pesky and annoying things like “facts and evidence” still point to Foster’s death being a suicide.

Despite there never being any charges filed, or even enough evidence to warrant a homicide investigation into either, the simple truth is that every good, clean, ammo hoarding patriot knows that any time anyone dies in America, it’s probably the work of either Crooked Hillary or Slick Willy. But that hasn’t stopped freedom loving Americans from compiling the list of people that the Clintons’ killed, evidence be damned! We scoured the Internet and found out none of these people have been put on the Clinton Body Count yet, and so we decided to start the rumors ourselves.

Here are the five names we decided to contribute to the Clinton Body Count.

Obviously, we’ll never know who really killed Ron Goldman and Nicole Brown Simpson, despite a literal trail of blood that took police from the murder scene, into OJ Simpson’s Ford Bronco, and into his home. Things like DNA evidence don’t really matter when you have enough money to get you off anyway…well, unless you’re a billionaire pedophile. Then, believe it or not, it would seem that at some point you might not be able to buy yourself out trouble. But since we just can’t be too sure if OJ really killed Ron and Nicole, it’s probably much fairer to assign the blame to the Clintons, don’t you think?

A lot of conspiracy theories involve Elvis being alive, but let’s get real: that’s crazy! Elvis is dead. Elvis has been dead for over 40 years. However! That doesn’t mean it’s not very possible-ish that the people who put the King of Rock and Roll on a train to Heaven were none other than Bill and Hillary Clinton. Of course I don’t have any evidence to back this theory up, but then again, evidence isn’t the point when it comes to blaming the Clintons for things, is it? Plus, think about — Bill probably killed Elvis because he plays saxophone and the King didn’t want to put him on one of his records. Or maybe Hillary killed Elvis because Elvis worked with Nixon. Regardless of which idiotic reason you choose, let’s just all agree the Clintons killed Elvis and move on, shall we?

If there is one person’s death who has spawned more conspiracy theories than JFK’s, we don’t know who that person might be. Maybe Jesus Christ. But as demonic and on the payroll of Satan as the Clintons are, the fact is the Bible doesn’t mention them, so we know for a fact they’re in the clear on that one. But JFK is still very much up in the air. Was Bill the second gunman on the grass knoll? Was Hillary one of the magic bullets that fired from Lee Harvey Oswald’s rifle? We may never know, but we should still act like we know for sure and tell everyone about it on social media, just to be on the safe side.

Republicans have known for years now that Hillary was the mastermind of the murder of one Mr. Ben Gozzi. You probably saw them all changing their middle names on Facebook to try and bring awareness to the cause. But despite millions of dollars on congressional investigations led by both Darrell Issa and Trey Gowdy, she’s managed to evade capture. But now that Epstein’s death has put the focus back on Crooked H, can the FBI finally collar her? Only time will tell. #NeverForgetBenGozzi

This is about as believable as 99% of the names on the Clinton Body Count. So let’s just get really weird with it and put their own names on the list. Who knows? Maybe Bill and Hillary performed a murder/suicide pact but got to come back to life since they also worship Satan and Saul Alinksy. Stranger things have happened, we’re sure.

This Weeping Man Will Pummel Your Snowflake Ass If You Make Fun Of His Dear Sweet President Again!

There are certain words in the English language that are categorically terrible, stupid, idiotic ...

Local Man Not Defensive, But Why Are You Even Asking?!

This morning, President Donald Trump issued an executive order that he says will “ensure ...

ST. FRANK, CALIFORNIA — When she boarded the Queen’s Line cruise liner in Hawaii, ...

Asshole Itching to Give All His Asshole Opinions

THE SHITE VALLEY, CALIFORNIA — From within his gated community, sitting in the living ...